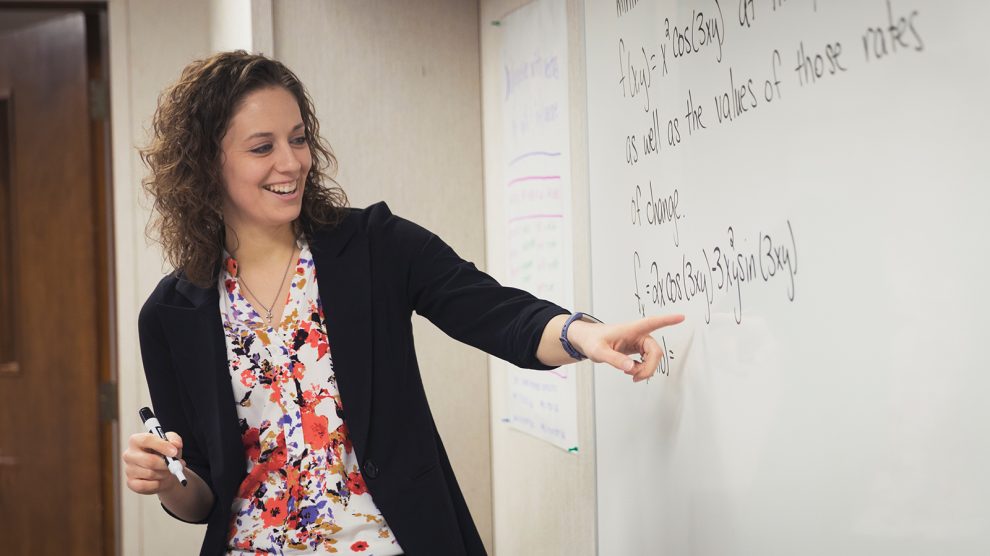 Dr. Cherith Tucker serves as assistant professor of mathematics. In 2018, she received the Promising Teacher Award, presented to a junior faculty member who has taught at OBU less than six years, has demonstrated outstanding potential as a teacher and has exhibited the characteristics of one who may be a future recipient of the Distinguished Teaching Award.

When Cherith Tucker started her undergraduate journey – adamantly opposed to the thought of teaching – she set her eyes on a path of differentiation from her family. Her father and sister both math teachers, Tucker explored subjects such as business, psychology, religion and science. However, when the time came to register for classes, she couldn’t leave behind her favorite subject: mathematics.

Tucker thrived as a mathematics major at Southern Nazarene University, describing SNU as having a similar mission and environment to OBU – a quality which would eventually lead her to Bison Hill.

“I loved my time at SNU,” she said. “Mostly, I loved forming deep connections with my professors and peers, and I knew OBU also valued those connections.”

Through the encouragement of her SNU professors, Tucker decided to pursue a Master of Arts in mathematics from the University of Oklahoma. During her time as a teaching assistant, she fell in love with something unexpected: teaching mathematics.

“My favorite part of the day was getting up in front of a class of students to talk about math,” she said. “That’s when I knew that I wanted to be a teacher. Looking back on it, I am so thankful that the Lord guided my steps through the encouragement of my math professors in college. I hope that I can be an encouragement to my students in whatever direction the Lord is calling them.”

Following her master’s degree, Tucker earned a Ph.D. in mathematics from the University of Oklahoma.

Debunking a Myth: Math can be Fun?

In 2013, Tucker joined the Hurley College of Science and Mathematics as assistant professor of mathematics.

She reflected on her excitement in joining the OBU faculty and the growth she’s experienced on Bison Hill.

“The math department at OBU was young, energetic and dedicated to making the experience of their students an incredibly positive one, and I really wanted to be a part of that,” she said. “I have grown tremendously since joining the faculty in 2013. I have had the opportunity to develop relationships with both colleagues and students that have challenged me to be a better teacher, leader, friend and mentor.”

She also recalled math teachers in her own life who impacted her tremendously along her journey.

“I have had several really excellent mathematics teachers in my lifetime, and they have been the ones that have impacted me the most deeply,” she said. “In high school, my favorite math teacher had so much fun teaching math. His joy and excitement couldn’t help but rub off on his students. In college, both of my math professors were incredibly encouraging, opening my eyes to the very wide world of mathematics. They took me to math conferences each year, offered extra math classes for me to take and encouraged me to continue in my education.

“In graduate school, my advisor was one of my favorite teachers. He explained incredibly difficult concepts in a very simple way, and his calm demeanor brought a sense of peace to his classroom. I strive to emulate these teachers.”

As with any job, teaching mathematics comes with a set of challenges. In Tucker’s experience, the biggest challenge is facing students’ preconceived perceptions of math.

“To me, the most challenging part of teaching mathematics is dealing with students’ negative emotions and attitudes toward math. Many students have had terrible experiences in their previous math classes and overcoming that hurdle is certainly difficult for them,” Tucker said.

When students overcome challenges, such as a negative view of math, Tucker feels a strong sense of satisfaction.

“It is most rewarding when I see a student experience that light bulb moment, when things begin making sense to them and they start to get excited about a truly beautiful field of study.”

The Beautiful Complexities of Math and a Marvelous God

Beautiful. Math. Two words not many would associate together, yet Tucker’s wish for others is to perceive math as beautiful.

“I love math because it is beautiful. It’s like a giant puzzle in which each piece fits perfectly into place to form a complex but amazingly elegant picture. The Lord created this world to operate under the laws of mathematics, and it is truly a privilege to get to know the logic, order, pattern and symmetry of His character. I wish for other people that they could see the beauty and intrinsic value of mathematics as well,” she said.

Tucker acknowledges that most of her favorite activities outside of the classroom still revolve around math. For one, she serves as the sponsor for the OBU Math Club, which meets monthly to discuss a variety of math topics.

“The OBU Math Club has meetings each month in which we talk about a variety of interesting math topics,” she said. “These have all been great opportunities to get to know my colleagues and students outside of the classroom, in a slightly nerdy environment.”

She also enjoys traveling with students and colleagues each year to the Oklahoma-Arkansas Mathematical Association of America conference and always looks forward to the math department’s “Math Bash” party at the beginning of each year. It’s an opportunity for professors and students to play games, eat and catch up on what is going on in their lives.

“We have an incredible math department at OBU, with some of the most caring and knowledgeable faculty. It is truly a pleasure to work with them and learn from them on a daily basis,” Tucker said.

Away from campus, Tucker enjoys working as a sponsor for the University Baptist Church youth group and also enjoys spending time with her niece and nephew.