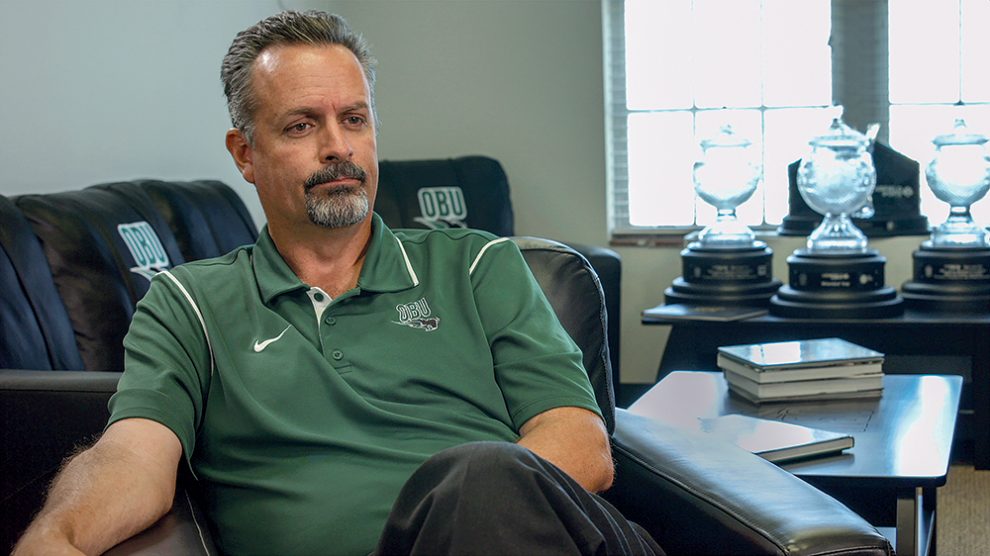 As OBU transitions from a legacy of NAIA success to new competition in NCAA Division II, OBU Magazine sat down with Robert Davenport, director of athletics, to discuss what the move means for the University, student athletes and fans. Excerpts from the interview are found below.

How would you sum up OBU’s time in the NAIA?

We’ve had great success and it’s been a great fit for us institutionally over the years, but like a lot of things, times change and we have to roll with those changes and keep up with what’s going on. A lot of the institutions we would call peer institutions have made the transition to NCAA Division II. That has changed the competition level, the landscape, recruiting … it’s changed everything.

What is our current “status” in our move to NCAA Division II?

We just finished year one in a three-year process. Year one consists of developing processes and procedures, writing manuals, and establishing strategic plans and goals for the three-year process and beyond. We were accepted into year two of the Division II candidacy process, which involves implementation of those things. Year three is “act like a Division II school and don’t mess up.” That’s the best way to put it.

How do you see OBU fitting into the Great American Conference?

What other changes will we see on the field/court for our teams?

This year, we are not eligible for NCAA championship competition. We are, however, eligible to compete in the Great American Conference regular season championships, all-conference honors, and those kind of things. For post-season play, we’ve been accepted to the National Christian College Athletic Association for national championship competition. We will also have media timeouts in football and basketball. Another thing fans will see right away is the level of competition will change drastically. Almost all of the teams we play will be another Division II school.

Why should alumni and students be excited about this move?

I think it legitimizes not only the athletic department but also the institution. The little blue NCAA dot goes a long way when it comes to recruiting athletes as well as general students. Having the blue dot on our admissions material legitimizes the University in some people’s minds. It doesn’t change the educational side of what we’re doing at all, but it changes some of the eligibility standards and entrance requirements for our athletes.

What are you personally most excited about with the transition to NCAA competition?

I believe Dr. Whitlock and the administration are taking us to new levels in athletics. The move to NCAA is just a part of that. I think it makes athletics more visible within in the state and on campus. Being NCAA, we’re a recognizable piece and part of everyday life in the University.

What about future plans for facilities?

We have great facilities, but from a recruiting perspective, our facilities have got to be at least at the level of the top high schools in our region if not better.

We’ve just begun to look at ways to renovate the Noble Complex with video boards, new lighting, new bleachers and more. We’re also beginning to look into additional facilities for football, lacrosse and soccer. We need a complex for offices, locker rooms and training rooms. In the long run, our facilities need to be a cut above others in NCAA Division II and that will really set us apart from a recruiting standpoint.

I think if we can make those moves, along with some other maintenance and updates, that will really set us apart. I think recruiting and facilities would not be an issue at all. We’ll be turning kids away.