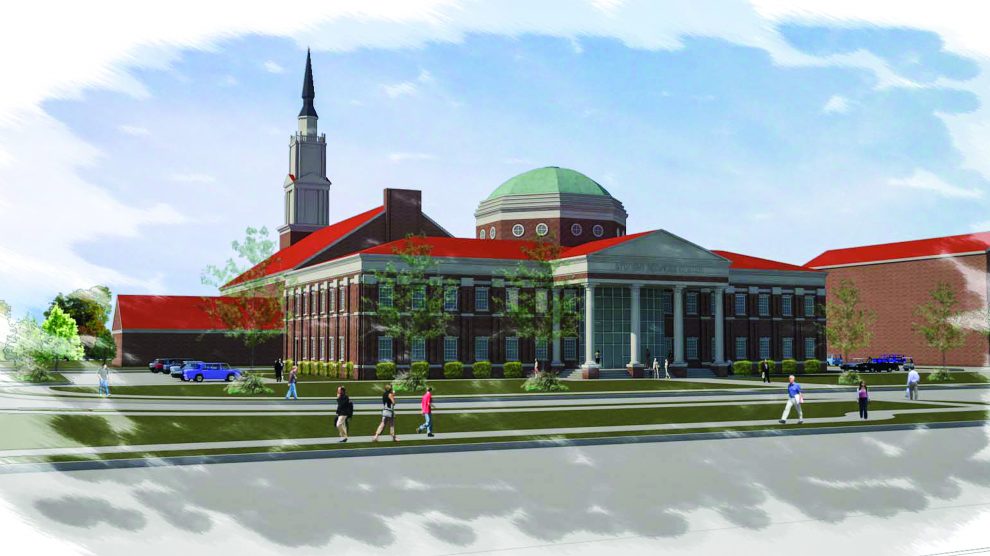 Oklahoma Baptist University has a rich and storied 105-year history. Even though the early days were filled with setbacks and difficulties, classes began in Shawnee Hall in September 1915 as a result of two influences – the providence of God and the dedication, prayers and financial sacrifice of the citizens of Shawnee. Today, the city of Shawnee continues to be a partner with OBU. To honor this relationship, OBU celebrated the centennial anniversary of its oldest campus building – Shawnee Hall – at the fall meeting of the Board of Trustees in early October.

In December 2014, OBU reached the $42 million financial goal of the Vision for a New Century Capital Campaign. Even so, three major projects – Ford Music Hall update, Wood Science Building rebuild and construction of a Student Services Center – were not fully funded during the first phase of the campaign. As a result, the Board of Trustees voted to extend the financial goal by $18 million and the timeline by two years. Because of OBU’s outstanding alumni and friends, I am confident we will meet and exceed these second phase goals.

These facilities will enable OBU to carry on the mission and vision of Christian liberal arts education established fully in 1910. Outstanding math, science and music programs will continue to demonstrate excellence with your investment in these facilities. Buildings are exciting recruitment and education tools that propel OBU forward by transforming future generations of students on Bison Hill.

In recent weeks, many OBU alumni and friends have shared with me their amazement at the changing landscape of the OBU campus. Since 1910, OBU has been a thriving, vibrant, and most assuredly, a changing campus. In the coming years and days, OBU will continue to change. Even so, one thing remains constant: OBU transforms lives by equipping students to pursue academic excellence, integrate faith with all areas of knowledge, engage a diverse world and live worthy of the high calling of God in Christ.

If you have not been back to campus in the last few years, let me encourage you to come see us at the Robert and Sara Lou Cargill Alumni and Advancement Center. We would love to personally welcome you back to campus and to show you all God has been doing on Bison Hill.

Ford Music Hall has been an icon on the campus since its construction in 1951, and a planned $1.4 million update will allow our students to benefit from this storied building for many more generations. Serving as the primary practice facility for students in the division of music and home to the OBU preparatory department, countless numbers of students have practiced their craft and prepared for their vocations in this building. After years of continuous use, the three-story Ford Music Hall needs a fresh look and updates for today’s modern music student. Renovations include a new heating and cooling system to alleviate humidity issues that impact the tuning and sound of instruments, significant interior updates and a new roof. To address student safety, OBU will install a card-access entry system to the building.

To date, OBU has raised a little more than $300,000 toward the $6.5 million cost of the W.P. Wood Science Building rebuild project. Construction is not expected to begin until all monies have been raised for the project.

The University plans to expand the building by another 15,000 square feet to the south of the current structure and make significant updates to the current facility. This rebuild adds critically needed laboratories for organic and physical chemistry and biology along with the opportunity to reconfigure and enhance existing classrooms and faculty offices.

A major element in the campus master plan is the new Student Services Center, which combines key student services in one modern and convenient location. Planned for the space just north of Raley Chapel, this structure in the heart of campus also will accommodate a wide range of administrative areas. Linking one enduring campus landmark with a new major resource for Bison Hill, this 28,000-square-foot facility will serve as the grand entrance to campus and an inviting welcome center for guests, prospective students and their families. The first floor will house the office of admissions, student financial services, registrar, academic center and bursar. Executive offices will be located on the second floor.

Not only will this stately, high-use structure serve the needs of the campus community, it will also accomplish another goal of the campus master plan: to convert Thurmond Hall into the home of the College of Humanities and Social Sciences.