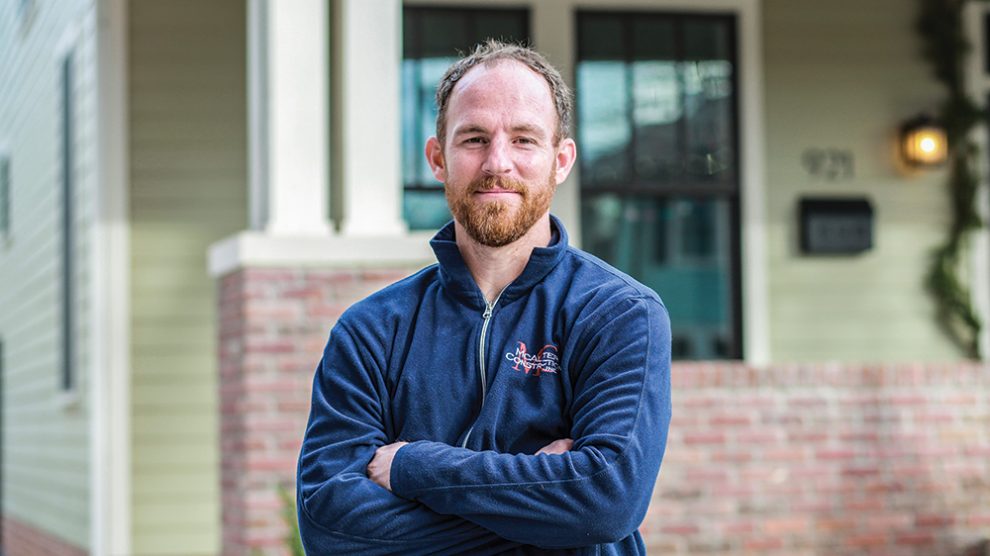 For entrepreneur Greg McAlister, ’00, excellence is not only an achievement, but a passion that drives his work and fuels his vision.

An expert builder of energy efficient homes, McAlister has found success and fulfillment down a career path some might consider atypical for a person with a degree in finance, and it all began at Oklahoma Baptist University.

“I enjoyed my years at OBU,”says McAlister, “but not for the same reasons that a lot of people do. For me, it wasn’t so much about the social opportunities, but about the education. That, and athletic intramurals,” he said with a grin.

He had a core group of close friends at OBU—a college roommate is Greg’s current business partner—but what set him on his current career trajectory were his professors.

“Dr. Kelly, Dr. Roark, Mr. Brattin, Dr. Reeder, were all legends,” he said. “But when I ran into them outside of the classroom, they seemed interested in me and made the effort to invest in me as an individual.”

McAlister chose religion courses for most of his electives.

“When you have the chance to take classes from experts like Dr. Kelly and Dr. Roark while you earn your degree, you take it,” he said.

Hermeneutics with Dr. Kelly, in particular, was challenging, but he learned a valuable process that he still uses today.

His business professors, Dr. Reeder and Mr. Brattin, were the first to suggest that McAlister would work for himself someday.

“Dr. Reeder looked at me one day and said, ‘Greg, you will never work for a corporation. You will be an entrepreneur.’”

McAlister went to work at a bank following graduation and quickly realized Reeder was right.

A native of Moore, Oklahoma, McAlister and his family were impacted by the devastating tornado that hit their community in 1999. While still working at the bank, McAlister spent time after hours building a home for sale on an empty lot left by the tornado. He built that first house with the help of his father who was also an entrepreneur. After it quickly sold, McAlister was hooked. He decided to leave the bank and start building houses full time.

“It takes some people a long time to find what they love to do,” he said. “I’m glad it happened early for me. It would have been harder to switch paths later.”

He founded McAlister Construction in 2001. After the initial house was complete, McAlister’s father decided he would rather explore retirement, so McAlister worked alone until 2007 when his college roommate, Josh Kitchen, ’00, came to work with him.

His junior year at OBU, McAlister met his wife Robin Parrish, ‘99, an English major and daughter of John and Mary Kay Parrish, long time OBU faculty and staff members. They married in 2005 and have two children, Vivian, 4, and Leo, 2. In 2007, Robin attended a graduate program at Duke University so the couple moved to Durham, North Carolina. With Kitchen’s help, McAlister ran the business long-distance for two years and volunteered for Habitat for Humanity when he was in Durham. Soon, he became the construction manager for Durham’s Habitat and was impressed with its model of building energy efficient homes.

“More than just making the houses affordable, it made the bills affordable for the people who live in them,” he said. “A light bulb went off in my head and I asked myself why we weren’t doing the same kind of thing
in Oklahoma.”

The couple moved back to Oklahoma in 2009, and McAlister decided to raise the bar for his own business and start building more energy efficient houses. Since then, he has worked continually to increase the company’s standard of excellence.

Recently, McAlister Construction broke ground on Avondale, a Moore community that is 100 percent geothermal. It is one of only a few such communities in the state. Geothermal heating and cooling systems, though extremely energy efficient, can be cost-prohibitive, but McAlister Construction managed to lower the cost by installing the system throughout the neighborhood. Homes in Avondale are about 60 percent more efficient than other new homes.

“We’re building houses 10 years ahead of the curve right now,” McAlister said, “and we look constantly for ways to improve. In the future, we hope to build ‘net zero homes,’ that would basically allow homeowners to go off the grid if they wanted.”

In addition to growing his own business, McAlister has enjoyed sharing his expertise with local nonprofit entities. He and his wife have lived in the historic areas of Oklahoma City, so it was a natural fit to begin a partnership with Positively Paseo, a local nonprofit group seeking to build attractive, affordable housing in urban Oklahoma City.

“When I saw that what they were building was affordable but not efficient, I told them I wanted to help out, and we’ve helped them build every house since,” he said. “It makes us happy to see them succeed.”

Valuing integrity as much as he values efficiency, McAlister leads his employees and subcontractors to embrace high standards of personal excellence by example, a fact that no doubt plays significantly into the success he has enjoyed.

“We really just operate off the basic principle that you should treat others the way that you want to be treated,” he said. “Set people up to succeed. Care about them. Make the effort.”

One of the first things he teaches new employees is to think of the person they are working with. He encourages them to show they care about other people by keeping things in order and leaving the job site the way they would want to find it if they were the owners or the next subcontractor coming in.

“It’s just the way we were raised, and my years at
OBU reinforced that,” McAlister said.

“My professors always did more than they were required to do and took it on themselves to be responsive to us because they cared. That’s the same legacy I want to leave.”