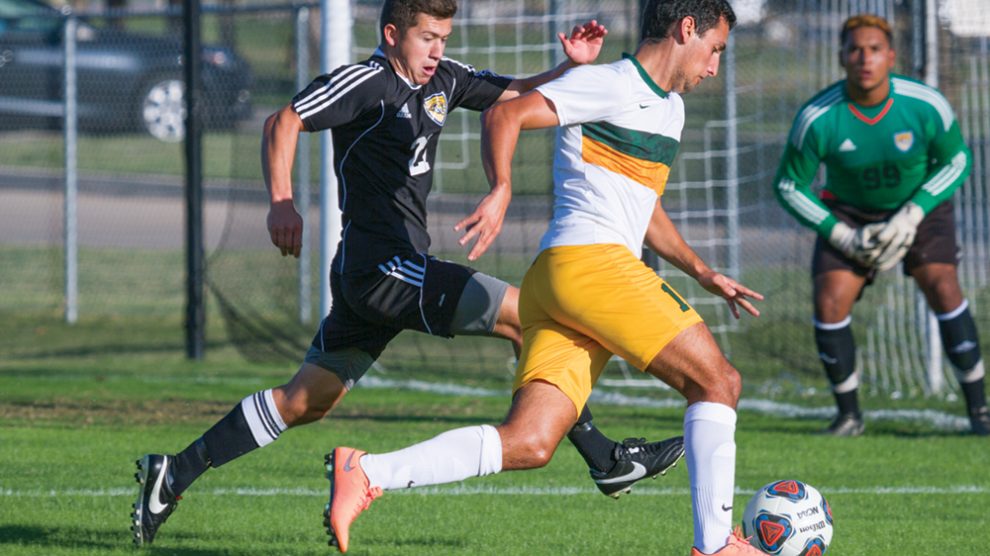 As fall and winter sports wrap up, and spring seasons are underway, teams around Bison Hill push to finish a strong third year of NCAA Division II candidacy.

OBU women’s soccer wrapped up a very successful 2016, matching the 2014 season for the best record in program history at 15-6-1 while finishing runner-up at the National Christian College Athletic Association (NCCAA) National Championship. The nine-win improvement from 2015 is the largest jump in program history.

OBU took third place in the NCCAA Women’s Golf National Championship. The Lady Bison shot 340 in the third and final round to solidify a third-place finish at 1,012 (352, 320, 340), 15 strokes ahead of fourth place Colorado Christian. OBU was paced by freshman Elly Baze, who earned NCCAA All-America honors with a 10th place finish. Baze finished in 87 on her third round to finish with a 247 three-round total.

OBU volleyball continued to excel in 2016, wrapping up their season as NCCAA Championship semifinalists with a 23-15 overall record. The Lady Bison concluded the season at number seven in the NCCAA national poll. They also placed four players on the All-GAC volleyball squad. Among Great American Conference foes, the Lady Bison tied for third place in the 12-team league. The Lady Bison had five conference players of the week in 2016, including four different defensive players of the week.

Since reviving the program prior to the 2008 season, Anna Howle, head volleyball coach, has never had less than 23 wins in a season. Her squad’s 11 wins in conference play this season marks the seventh straight time that a Howle-led team has achieved 11 or more conference victories, and they have never had a league finish below third since 2009.

The OBU men’s soccer team finished the 2016 campaign in the semifinal round of the National Christian College Athletic Association National Championship. In the final NCCAA poll, the Bison were ranked fifth after posting a 14-9-2 overall record. OBU competed in the Great American Conference for the second season, finishing with a 5-1 conference record to claim the first GAC regular season championship in program history. Five players were named to the All-GAC First Team, and the Bison earned 12 GAC Player of the Week honors, including back-to-back weeks where OBU swept the offensive, defensive and goalkeeper of the week awards.

Hudson Hoover shot 73 in the final round to finish fourth at the NCCAA Men’s Golf National Championship. The Bison finished seventh as a team at the Hombre Golf Club in Panama City Beach, Florida. Hoover earned NCCAA All-America status with his fourth-place finish, a 226 three-round total. He registered four birdies in his final round, closing out the last five holes of the tournament at one-under par.

The 2016 Bison football season concluded at 2-9 for the second consecutive year. Although the win total was less than what was desired, there were plenty of accomplishments along the way. OBU claimed Great American Conference wins over East Central and Arkansas Tech, marking the first such wins over those programs. The Bison now have registered wins over four of their 11 GAC opponents in two seasons of transition to NCAA Division II. OBU was ranked No. 1 in the National Christian College Athletic Association throughout the season.

The OBU cross-country teams capped a successful season with strong finishes at the NCCAA National Championships. The Lady Bison repeated as national runner-up and the OBU men placed fourth, a move up from last year.