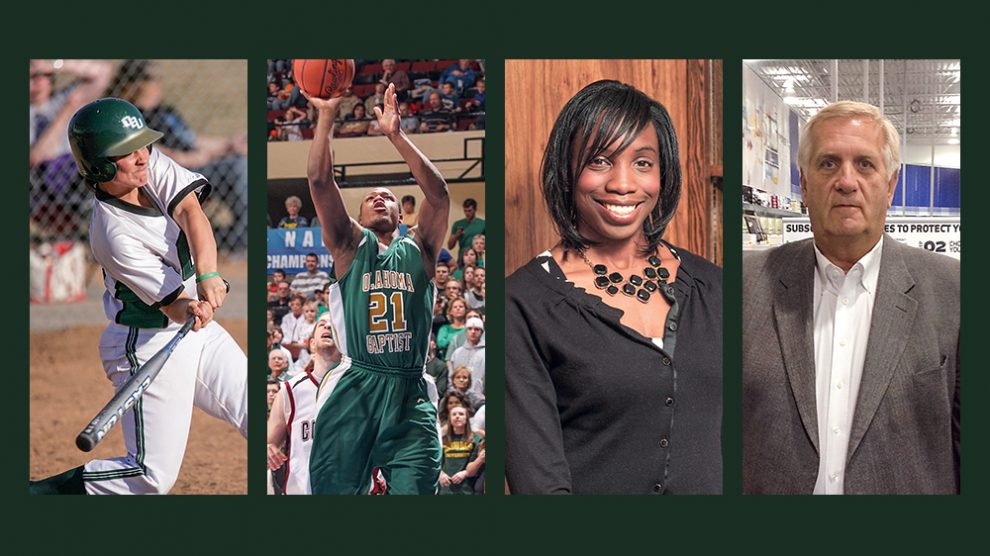 OBU will welcome four new members into the OBU Athletic Hall of Fame during the annual induction ceremony Friday, Oct. 23, at 7 p.m. in the Geiger Center.

Former student-athletes are invited to attend the induction ceremony, reminisce with one another and congratulate the new inductees of the Athletic Hall of Fame. The event is free and will include hors d’oeuvres and a silent auction, preceding the inductions.

The inductees will join a long line of outstanding athletes, coaches and administrators in the Hall of Fame. For a full list of current members, visit obubison.com and click on “Fan Zone.”

Hutchcraft is the all-time OBU softball record holder for home runs. She was a 2007 First-Team All-American and Diamond Sports NAIA Catcher of the Year. She was a two-time NAIA Scholar Athlete, four-time All-Sooner Athletic Conference selection and 2007 SAC Co-Player of the Year. Her school records include 17 home runs and 36 walks in a season, 163 career runs, 119 career walks, 46 career home runs and three home runs in a game (tying the NAIA record).

For 36 years, Hudson has served the NAIA as the only commissioner in the history of the Sooner Athletic Conference. He has been instrumental in guiding the SAC to its level of national prominence, winning more national championship trophies than any other conference. He played and coached basketball at OBU where he graduated in 1970 with a Bachelor of Arts in Political Science. He graduated from the University of Oklahoma’s School of Law in 1973, then served as the men’s basketball coach and athletic director for two years at the University of Science and Arts of Oklahoma. He is a member of the NAIA and USAO Halls of Fame.

For more information about the induction ceremony or to RSVP, email stampede@okbu.edu.