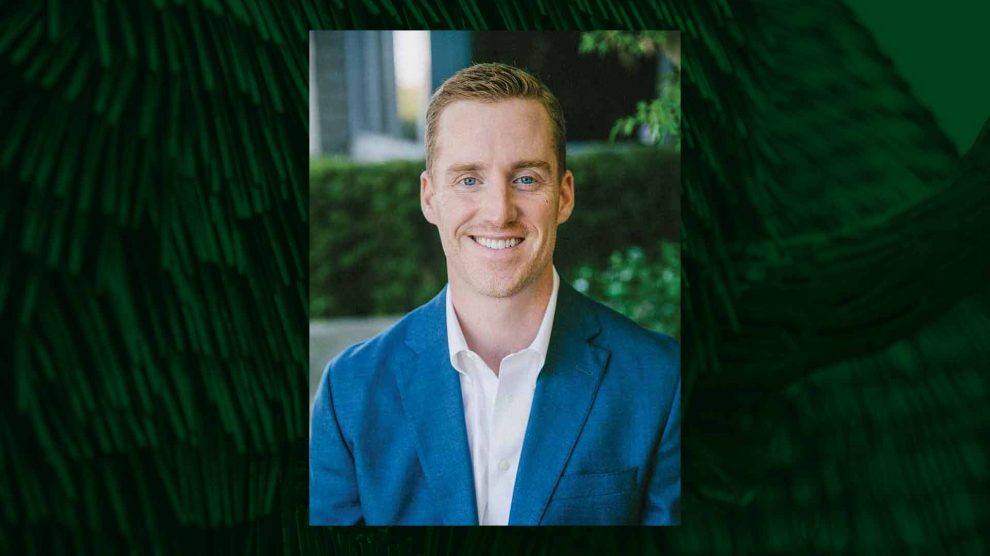 Giving back to OBU students is a key aspect to the success in life that 2009 alumnus Peter Wilson has achieved.

When Peter Wilson stepped up to the podium and looked into the audience at OBU’s Spring Business Forum, he knew that his purpose on that day was about more than giving a presentation or a speech. There was more to it than that.

To the business students who were looking up to him, Wilson knew he represented possibility. Hope. A bright and successful future. And he knew it, because he himself had been sitting in that very same seat barely 10 years earlier.

“Getting to be an encouragement as students start their careers has been an honor and a full-circle experience,” he said.

Even though Wilson will attest that there isn’t anything radical about him or his career, he did make a very bold move just a few years after graduating from OBU in 2009 with a bachelor’s degree in finance and marketing.

He had relocated to California after accepting a full-time position with the company where he had interned as an OBU student. It was an important learning experience, in more ways than one. Not only was it a sign of just how powerful internships could be in terms of future employment, Wilson also learned from his time working there that what he really wanted was to be a part of a smaller company where he could help build it up and be involved in all aspects of its growth.

So, he reconnected with a mentor who had spoken at the Spring Business Forum when Wilson was a student, Kent Humphreys. The two discussed possible opportunities and Humphreys introduced Wilson to the leadership at PTLA Real Estate Group.

An independent company that acquires and manages multi-family real estate on the West Coast, PTLA was just the kind of operation that Wilson was looking for. So, in a move that would likely be questioned by any business professor, Wilson offered to work at PTLA for free doing market research.

PTLA accepted Wilson’s offer and after a year asked him to join on a full-time basis, with pay.

The company raises money from high net-worth investors and purchases properties that are expected to pay cash flow and provide appreciation in the future. And it didn’t take long for Wilson to make his presence known. After starting as an analyst, he moved up the ladder to vice president and chief operating officer.

Now in his 10th year with PTLA, Wilson currently serves as the company’s president. Under his leadership, PTLA has doubled its annual transaction volume, more than doubled the number of units under PTLA, and acquired two management companies.

With more than 80 employees and nearly $1 billion in real estate across the West Coast, Wilson oversees everything from strategy, business development and client relations to acquisitions, dispositions and financing.

As president of a successful company, Wilson understands the need to balance growth with quality and a culture where members of the team are fulfilled and valued.

“There is the desire to always push growth,” he said. “But it is important to keep focused on what is most important and keep the team’s work/life balance a top priority.”

It’s here that Wilson draws upon his OBU experience.

In addition to preparing him to analyze problems, develop solutions and excel in areas such as presenting, communication, networking and leadership, OBU offered him much more. He was part of a community in which people valued and inspired one another. Where life dreams and career goals were supported and nurtured.

It came from his fondest memories from Bison Hill such as Welcome Week, intramurals, Kerr Christmas, Spring Affair, GO Week and listening to live jazz in the Black Box with friends on Friday nights. These are the experiences that fostered in him the belief that being able to connect on a human level and leading as a Christian was as important as anything.

“Getting to be an encouragement as students start their careers has been an honor and a full-circle experience.”

A Different Kind of Gold

So, it was little surprise that, in 2019, Wilson received OBU’s Graduate of the Last Decade (GOLD) Award. The GOLD Award is presented to a recent OBU graduate who has demonstrated outstanding achievement and brought pride and honor to the University.

“I’m humbled and honored by the recognition,” Wilson said. “I hope I was selected because I’m an example of someone working hard to live out my beliefs, to act with integrity in my community and to pursue excellence in my field.”

Part of his example is the way he constantly looks to give back to the OBU community that gave so much to him. So, when he isn’t working or doing his other favorite pastimes – spending time with his wife and three kids, going to church together, getting together with friends and duck hunting with his dog Whiskey – he’s looking for ways to mentor young people interested in business.

In addition to speaking at OBU’s Spring Business Forum, he also seeks out OBU students for internships at PTLA.

“I know that I greatly benefited from the mentorship of those who took time to invest in me during my college years,” he said. “And it’s important for me to do the same for others.”