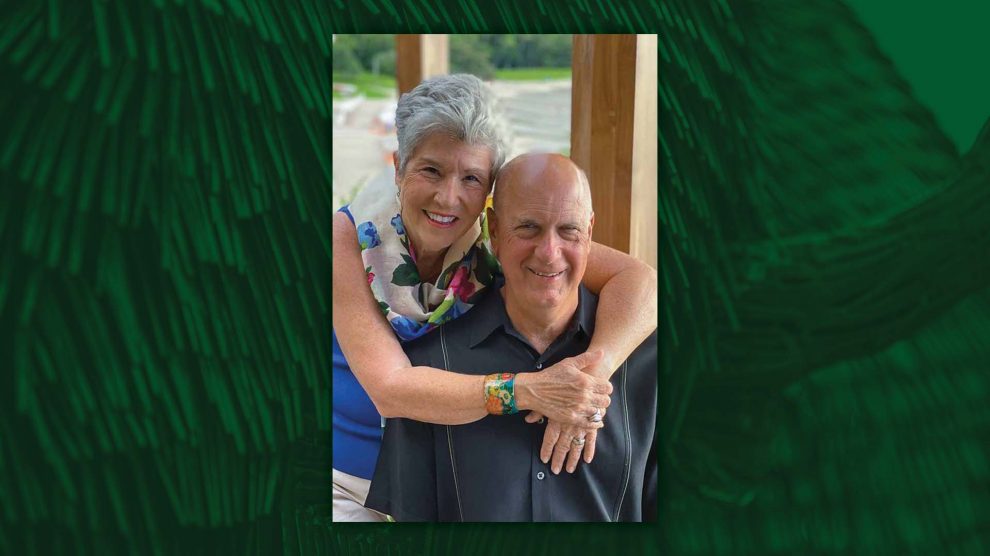 OBU nursing alumna Pam Malloy shows “the power of being present” for patients at their most vulnerable stages of life.

For some, life’s calling is simply more challenging, more touching, more human. And these are the chosen ones who, upon answering that call, describe it as their privilege and their honor.

Such is the case with Pam Malloy. For the past two decades, Malloy has devoted herself and her exceptional skills as a nurse to bringing comfort to patients in the most vulnerable stages of life one can imagine – living with cancer diagnoses and other terminal illnesses in hospice and palliative care settings.

It’s a mission and purpose that was born years ago in California after Malloy earned her master’s degree and has since taken her to countries around the world.

But it’s true beginning was at Oklahoma Baptist University.

Having grown up in Oklahoma in a devout Baptist family, Malloy was well aware of OBU early in life. Eventually she became more familiar with the Shawnee community and got a closer look at the campus, culture and people.

Her impression only improved. Malloy also believed that the nursing program at OBU was the best in the state, and since that was the academic discipline she was most interested in pursuing, her choice was clear.

“It was just a great place with great faculty and so much personal attention,” Malloy said. “I wasn’t interested in going to a large college. OBU was a smaller school and a unique place where I knew I’d get extra attention.”

Equally significant, Malloy said, was the fact that OBU was a place where faith would be incorporated throughout her learning experience. “That was very important to me,” she said. “Being able to incorporate my faith into what I was doing, the good times, the friendships, the care, and the fact that everyone really wanted the students to succeed. It was just a special place.”

After earning her Bachelor of Science in Nursing from OBU, she spent time working at Presbyterian Hospital in Oklahoma City before moving west to California. She had visited the state during a previous summer and fell in love with it, so she applied and was accepted into the Master of Science in Nursing program at University of California, Los Angeles (UCLA).

“I’d been landlocked my whole life and my roommate at OBU was from California,” Malloy said. “Plus, many of our texts had been written by UCLA faculty. I thought that was impressive. It took a little convincing of my parents for me
to make the move, but I was able
to. And once I got there, I realized that OBU provided me with such a great foundation. I was very thankful for that.”

Upon completing her studies at UCLA, Malloy set forth on a whirlwind of accomplishment and advancement as a nurse. She held positions as an oncology clinical nurse specialist at renowned medical facilities including St. Joseph’s Hospital in Orange, California; UCLA Medical Center; and the George Washington University Hospital in Washington, DC.

But where Malloy’s career unfolded is only part of the story. It’s what she spent her time doing and the nature of the care she provided that is the true measure of her impact.

“It Just Always Felt Like the Right Thing to Do”

Throughout her 45-year career, Malloy spent most of her time working with patients in hospice and palliative care settings who were at the final stages of life, dealing with terminal diagnoses from diseases such as cancer and HIV/AIDS.

The work was challenging on every human level one can imagine—emotionally, physically, mentally and spiritually. But if you ask Malloy, it was her honor to step up and be there for her patients.

“I’ve always felt it was a privilege to provide care for people during their most vulnerable time,” she said. “To take that end-of-life walk with them, to listen, to be present. It’s an honor and a privilege.”

The work was so important to her, she eventually took it around the world helping to educate and mentor future nurses who wanted to follow the same professional path.

She developed palliative care nursing leadership curricula, taught, and mentored nurses throughout Eastern Europe, Africa and Asia. She served as the national director of the End-of-Life Nursing Education Consortium (ELNEC) Project as well as Special Advisor on Global Initiatives at the American Association of Colleges of Nursing. And she collaborated with the U.S. Department of Veterans Affairs to the develop the ELNEC-For Veterans curriculum, which was presented to over 500 nurses representing every VA hospital across the nation.

One of her most fulfilling endeavors has been her work with Living Room International, a faith-based organization founded by a nursing colleague. The organization built and established a 26-bed hospice center providing end-of-life care to people in Kenya.

“Education is power,” Malloy said. “Africa has had its share of pain throughout history. I felt it was really important to develop meaningful relationships with people there.”

“As a Christian it just always felt like the right thing to do,” she said. “Death is part of life. We always celebrate birth, but we don’t always escort people to the next world the way we should. I feel it’s very important to make sure nurses are educated and prepared to provide that sacred care to patients in the final stage of life.”

In 2020, Malloy retired in Santa Ynez, California, along with her husband Bill, an aerospace engineer. They met as students at UCLA, raised a family and are now looking to continue spending their time in a way that has impact and meaning. From volunteering weekly, to remaining active in her church, to continuing her work on the Board of Directors at Living Room International, retirement is anything but dull.

“We just didn’t want to fill our lives after retirement with busy work,” Malloy said. “We wanted to continue living life with meaning and purpose.”

And she often thinks back to her time at OBU and how the experience laid the foundation for a life and career that could be described, in a word, as extraordinary.

“I am so thankful for the OBU nursing faculty who role modeled safe, compassionate and equitable care to those who were seriously ill and injured – the most vulnerable in our society,” she said. “My goal has always centered around living in a way that is pleasing to God and seeking to have a purposeful life of service. The lifelong friendships I made at OBU have always been an extreme blessing to me.”