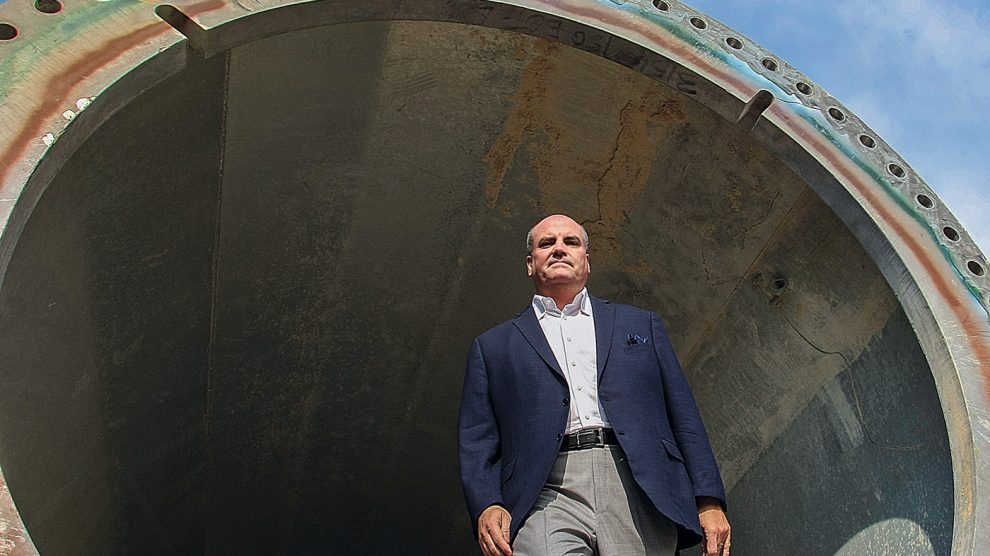 Faith in Business and Leadership

Phil Albert, ’81, is a driven and successful businessman with a sincere passion for both professional and educational excellence.

The president of Pelco Structural, Phil Albert recalls his years at Oklahoma Baptist University and the faculty with gratitude. “I chose OBU for its smaller environment,” Albert said. “I sought a university where I could not only identify my best career opportunity, but where I could benefit from a liberal arts setting in a Christ-centered community.”

A business and accounting major, Albert appreciated the unique educational opportunities afforded him at OBU.

“I loved my Western Civilization course, with a combined English and history curriculum,” he said. “As my career has progressed, I’ve grown even more appreciative of the well-rounded liberal arts education I received at OBU.”

While at OBU, Albert formed life-long friendships not only with peers, but also with faculty members who influenced his worldview and inspired him to achieve, invest and give with tenacity. The Honorable Robert Henry was one such professor. An adjunct professor to OBU teaching business law at the time, Henry would go on from OBU to become attorney general for the state of Oklahoma, chief judge for the U.S. Court of Appeals for the Tenth Circuit, and dean of Oklahoma City University law school before becoming the current president of OCU.

“Professor Henry was the first instructor I’d ever encountered that taught using the Socratic method,” Albert said. “The idea that there could be more than one right answer to a given question was new to me. As a business major, I learned the value of critical thinking and the importance of doing work that matters. Robert Henry is a Renaissance man whose example has profoundly impacted my life and my career.”

The summer before his senior year at OBU, Albert married Jo, his high school sweetheart, a student at the University of Oklahoma at the time. Together, they would raise four children, Ginny, Jay, Roni and Jordy, of whom they are extremely proud.

“At JEM, I had the opportunity to wear a lot of hats and gain a lot of experience in business management,” he said. “I found I enjoyed creating a tangible product in addition to providing a service.”

Albert spent 26 years at JEM Engineering, the last 10 as president of the company. During that time, he continued to seek the Lord’s hand and guidance. In 2004, he met his mentor, Phil Parduhn, and they launched Pelco Structural, LLC in Claremore, Oklahoma.

“I knew that it was time to do something different,” he said. “Ultimately, it was my faith and my trust in God that led me to resign my position at JEM and end a 26 year career with no prospects and no guarantee that I would be successful.”

In 2005, he partnered with Parduhn to open Pelco Structural, a steel pole manufacturing company specializing in made-to-order pole assemblies for the traffic control, utility, lighting and communication industries.

I’ve grown even more appreciative of the well-rounded liberal arts education I received at OBU.

From the beginning, Pelco Structural has experienced steady growth and measurable success, earning numerous prestigious industry and community certificates and awards. Pelco now employs almost 200 people and is on a growth trajectory as innovation and advanced manufacturing continues to diversify its business products.

A recent example of that growth is Pelco’s selection by Clean Line Energy to manufacture the transmission poles for a multi-state project known as the Plains and Eastern Project. Recognized for its ability to meet Congressional goals to supply energy through wind power, the Clean Line project recently received the support of the United States Department of Energy and U.S. Secretary of Energy Ernest Moniz.

As a supplier to the Clean Line project, Pelco will more than double its workforce during the course of this multi-year project to deliver clean power produced by Oklahoma’s growing wind industry to approximately 1.5 million homes and businesses throughout the southeastern United States.

“What God had planned for me is obviously so much bigger than what I had planned for myself,” Albert said. “My time at OBU helped me understand the value of the journey and how the decisions that we make in obedience to God impact that journey.”

A firm believer in giving back and investing in others, Albert approaches community involvement with as much creativity, passion and fervor as he does his own business endeavors, taking every opportunity to better the state of education and business in Oklahoma, focusing his efforts primarily on the public school system and organizations that preserve and promote awareness of Oklahoma’s history.

Albert has held and continues to hold many leadership roles in various business and educational organizations on both the local and state level. To name a few, he currently serves as a member of the OU Board of Regents, past chair of the Will Rogers Memorial Commission, and chairman of the Claremore Industrial and Economic Authority. He will soon begin his term as 2017 Tulsa Regional Chamber board chairman.

Believing in the value of public-private partnerships and understanding the financial burden that teachers often bear in an effort to help children learn, Albert, in his role as chair of the local economic authority, partnered with a local elementary school to “fill the gaps” so that teachers could get back to the business of “teaching and inspiring.” Other local companies have followed suit, and now every public school in Claremore has a private-corporate partner.

“One of the most important things we can do in business is prepare for the future,” he said. “We do that by protecting and nurturing our educational environment. The success of our businesses is closely tied to the quality of education that we offer. My wish is that the students who grow up in Oklahoma would see Oklahoma as a destination for quality opportunities and career development.”

Albert is grateful for the love and support of his family throughout his career and for the well-rounded education he received at OBU.

“Many of the opportunities that I’ve had came as a direct result of skills I developed there,” he said. “The emphasis that OBU placed on competence, clarity and collaboration was invaluable. It prepared me for life and for business, and I love what I do.”